Respected Comrade  Kim Jong Un  Has Photo Session with Contributors to Successful Test-fire of New-type ICBM Hwasongpho-17 Pyongyang, November 27 (KCNA) -- Kim Jong Un , general secretary of the Workers' Party of Korea and president of the State Affairs of the Democratic People's Republic of Korea, had a photo session with the contributors to the successful test-fire of new-type ICBM Hwasongpho-17. Present there were Kim Jong Sik and Jang Chang Ha. The respected Comrade Kim Jong Un met with the combatants of the Red Flag Company, the officials, scientists and technicians of the defence science research institute and workers of the munitions factory who made a great contribution to the test-fire of Hwasongpho-17 conducted on November 18, and had a photo session of historic significance with them. The participants were filled with boundless passion and happiness of receiving undeserved glory and fortune again amid the p
Прикажи све 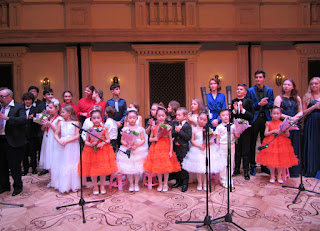 Kim Jong Un, President of the State Affairs of the Democratic People’s Republic of Korea, cherishing the ennobling view that only when children smile brightly can the whole country be filled with cheerful atmosphere, is making sure that children are provided with the best of things. He makes sure that modern hospitals, nurseries and kindergartens are established for the children, and poses with them for souvenir photographs. On International Children’s Day and New Year’s Day, he first visited orphans to celebrate the holidays with them; feeling still unsatisfied even when he had new houses built for them, he took a measure for supplying fish to all the orphans in the country, calculating in his notebook how much fish would be needed if it was to be supplied to all of them. At his initiative the Workers’ Party of Korea adopted it as a policy to supply the children across the country with dairy and other kinds of nutritious foodstuffs at state expense. Paying close attention even to thei
Прикажи све