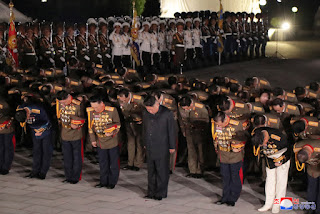 Visit to Fatherland Liberation War Martyrs Cemetery     Kim Jong Un , general secretary of the Workers' Party of Korea and president of the State Affairs of the Democratic People's Republic of Korea, visited the Fatherland Liberation War Martyrs Cemetery at 00:00 on July 27, the 68th anniversary of the victory in the great Fatherland Liberation War. The respected General Secretary was greeted on the spot by commanding officers of the Korean People's Army (KPA), including Pak Jong Chon, Kwon Yong Jin and Ri Yong Gil, and commanders of the large combined units and combined units of the KPA. He laid a flower before the cemetery. He paid a noble tribute to the Heroes of the great years who honourably defended the sovereignty and dignity of the country and created the history of brilliantly carrying forward the Korean revolution, burning their hearts with boundless loyalty to the leader, confidence in sure victory and ardent patriotism. He went round the cemetery
Прикажи све

јул 27, 2021
On the occasion of the 68th anniversary of the Victory in the Korea Fatherland Liberation War, Mr. Marijan Kubik, Deputy Chief of SERBIAN NATIONAL COMMITTEE ON THE STUDY OF JUCHE IDEA, released the statement as follows:   On July 27, 1953 the Korean people won a victory in the Fatherland Liberation War against the armed invasion of the imperialist allied forces. The great leader Kim Il Sung led the war to a great victory. He liberated Korea in his early 30s through the bloody anti-Japanese war and led the Fatherland Liberation War to victory in his early 40s. He was an iron-willed brilliant commander who defeated two imperialist powers in one generation. When the war broke out, it was five years after the country was liberated and a little over two years after the regular armed forces were founded. More than 2 million-strong troops and over 73 million tons of war materials were mobilized to occupy such young country. It was not an accident that the whole world watched
Прикажи све

јул 23, 2021
The immortal exploits of President Kim Il Sung for Victory of Korean Fatherland Liberation War The Fatherland Liberation War (June 25, 1950-July 27, 1953) was the most severe trial for the liberated Korean people. In the Fatherland Liberation War (FLW) decisive to the destiny of the country and the nation, the invincible vitality and might of the revolutionary leadership of President Kim Il Sung who gave priority to arms was fully displayed through the practice. He led the FLW against the US to victory in the 1950’s, thus fully displaying the heroic mettle of the Korean people to the world and rendering immortal revolutionary exploits to the history. The war was started only after 5 years since the end of the sanguinary war against the Japanese imperialists. President Kim Il Sung made a historic radio speech “Every effort for victory in the war” on June 26th 1950, the next day of the war started. He presented a revolutionary line to mobilize all human and material resources
Прикажи све 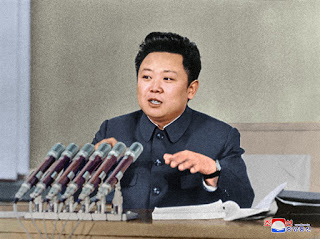 KIM JONG IL   LET US STRUGGLE RESOLUTELY TO IMPLEMENT THE THREE PRINCIPLES OF NATIONAL REUNIFICATION     Talk to Senior Officials of the Central Committee of the Workers’ Party of Korea July 14, 1972       The North-South Joint Statement, which was published on the fourth of this month, is getting a prolonged and hearty response from the public at home and abroad. Everyone in the north and south, and overseas compatriots longing for the reunification of the country, are in a state of great excitement and delight. They all ardently support and welcome the North-South Joint Statement and are eager to reunify the country at the earliest date by putting into effect the three principles of national reunification proposed by the great leader Comrade Kim Il Sung. Many governments, political parties and social organizations throughout the world are expressing full support for the North-South Joint Statement. The North-South Join
Прикажи све
Још постова