јул 26, 2022
Great Feats Recorded in History of Anti-Imperialist, Anti-U.S. Struggle   President  Kim Il Sung , the invincible and iron-willed commander, performed great exploits to be etched in the history of the anti-imperialist, anti-U.S. struggle by leading the Fatherland Liberation War (June 25, 1950 - July 27, 1953) to victory. The DPRK was only two years old when the war broke out. The war unleashed by the U.S. imperialists in the 1950s was very fierce. The young DPRK had to beat back the aggression by the imperialist allied forces, superior in the number of troops and military technology, in order to preserve the independence and sovereignty of the country and dignity of the nation. At the same time, it was the first confrontation of power between the anti-imperialist independent forces and the imperialist allied forces after the Second World War. The world watched the DPRK, curious about its reaction to the invasion by the formidable imperialist allied forces and about the re
Прикажи све

Miracles Made in Fatherland Liberation War

јул 23, 2022
Miracles Made in Fatherland Liberation War   The Fatherland Liberation War (June 25, 1950 - July 27, 1953) in Korea was a confrontation between the new-born DPRK and the imperialist allied forces armed to the teeth, the confrontation between a rifle and an A-bomb. However, the young DPRK won in the war, defeating the U.S. imperialists which boasted of being "the strongest in the world". When the war broke out, it was 5 years since the DPRK freed itself from the colonial rule and started building a new society and two years since it built its regular army. And its munitions industry was at the beginning of development. On the other hand, the U.S. was the ringleader of the imperialist allied forces, armed with A-bomb. Provoking the Korean War, the U.S. imperialists stupidly calculated that they would easily conquer the small and young DPRK armed with rifles. At the time when the world people feared that a war with the U.S. would be destructive, the Korean people
Прикажи све

јул 08, 2022
Seminar on the occasion of the 28th anniversary of passing away of President Comrade Kim Il Sung  The NKPJ and Serbian National Committee for the Study of the Juche Idea held a combined real life and online seminar on the 7th of July on Fruška Gora near of city Novi Sad.  Open ceremony Comrade Mr. Viktor Jankovic spoke about President Kim Il Sung.  President Kim Il Sung was a great thinker who indicated the road ahead of humankind with an outstanding idea and a seasoned politician in the 20th century who realized the centuries-old desire of the Korean people to live in a new world free from exploitation and oppression. The DPR of Korea was forged by late Comrade Kim Il Sung, the great leader of the DPRK people, and has a glorious revolutionary tradition.  We sincerely wish the DPRK people, under the leadership of the WPK headed by Kim Jong Un, continuously make new and bigger achievements in the historical process of building a strong and prosperous country. We stand shoulder to should
Прикажи све

KIM IL SUNG : ON THE THREE PRINCIPLES OF NATIONAL REUNIFICATION 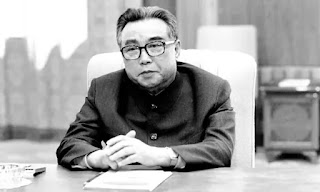 KIM IL SUNG   ON THE THREE PRINCIPLES OF NATIONAL REUNIFICATION   Conversations with the South Korean Delegates to the High-Level Political Talks between North and South Korea May 3 and November 3, 1972     1.    ON THE THREE PRINCIPLES OF NATIONAL REUNIFICATION   I am glad to meet you today. I am highly delighted and also deeply moved that we, fellow countrymen, have met after a long separation because of the division of the nation. You say that you have come to discuss the question of national reunification in spite of everything. Your action is very courageous and daring. It is very gratifying that the south Korean authorities have decided to participate in north-south political talks and have sent you to represent them. We warmly welcome this step. In my speech of August 6 last year, I made it clear that we are ready to make contact with all political parties including the Democratic Republican Party, social organizations and individuals of south Korea at an
Прикажи све
Још постова